“Historically, super-tall buildings have focused on structural challenges . . .
The rules have changed,
and energy has become the defining problem for our generation.”
—Scott Duncan of Skidmore, Owings & Merrill 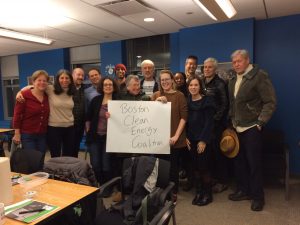 The challenges, solutions, and opportunity exist for Boston to pivot now from its fossil-fueled past and lead the transition to clean energy; this means moving our building designs into the 21st century through a relentless focus on efficiency and cost-effective switches from gas and other fossil fuels to clean, electricity-based heating/cooling. The Boston Clean Energy Coalition (BCEC) brings together member organizations and allies in the shared commitment to accelerate this shift away from natural-gas–driven energy in Boston’s buildings and toward construction fueled by renewables. Meeting this goal requires collaboration among all of Boston’s sectors: developers, elected officials, labor, investors, utilities, neighborhoods, faith-based groups, academia, environmentalists, and others. By providing an organizing space that fosters this process and promotes this collaboration, BCEC looks to spur innovative and transformational public policy that unwaveringly focuses on a green and clean future.

January 2022 As you may know, municipal aggregation of the purchase of clean energy for all Boston residents and small businesses—known as Community Choice Electricity—became the default electricity supply starting in February 2021. CCE offers three tiers from which to choose: Optional Basic (18% renewable electricity), Standard (28% renewable electricity) and Optional Green 100 (100% […]

It is hard to overstate the importance of these amendments, which will provide teeth, transparency, and tools rarely utilized in other cities in order to place meaningful requirements aimed at reducing the emissions of large buildings in Boston—where the building sector is responsible for more than 70 percent of the city’s GHG emissions annually. Reducing these emissions will mean better health for all residents, lower energy bills, and an increase in jobs needed to ensure the new standards and requirements are adhered to.

On November 19, 2020, Councilor Matt O’Malley held a (virtual) Boston City Council hearing to revisit previous efforts to promote net-zero-carbon (NZC) requirements for all new buildings as the city continues to undergo its second-largest development boom in history. Much has changed in the intervening three-plus years since Councilor O’Malley—with the support of BCEC—first raised the need to focus on reducing emissions from buildings (responsible for more than 70% of Boston’s GHG emissions) if the city is going to meet its carbon-neutral goals.

Our Statement of Solidarity with the Movement for Black Lives

The Boston Clean Energy Coalition (BCEC) stands in solidarity with the Movement for Black Lives and all those working toward racial justice. BCEC was established in early 2017 to address the growing existential crisis of climate catastrophe, with a particular focus on grassroots organizing. The destabilization of our global climate is rooted in the same exploitative and […]

Whenever we talk to neighborhood associations or developers or others about building proposals and advocate for all-electric net-zero-carbon construction, everyone’s first question is always, “How much extra will it cost?” This important and highly anticipated report just released from the Massachusetts chapter of the US Green Building Council (USGBC) finds that zero energy buildings are a great investment and are less expensive than stakeholders have previously assumed.

WGBH story: One out of every 5 new buildings in Boston is energy inefficient

Here is why we need all new buildings in Boston to work toward being net-zero carbon, and we need to do it now since we are in the midst of the third largest building boom Boston has ever witnessed.

Click to listen:
WGBH story: One out of every 5 new buildings in Boston is energy inefficient