Since the “Walk for Renewables” on August 1, 2016, which took place along the route of the proposed Back Bay/South End gas pipeline, BCEC has been working to make residents aware of this fossil-fuel project, gain information and details about the extent of the project from National Grid and the City, delay PIC permitting of the project (along with unanimous support from the City Council) at least until a robust community process is held, and ultimately stop the pipeline from being built. It is clear that the City will never meet its carbon neutral goals by constructing more gas pipelines such as this one for all of the planned new development in Boston. 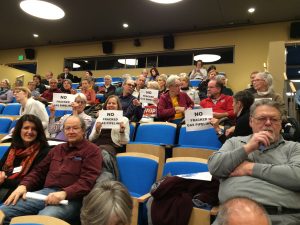 Ultimately, the City of Boston’s Office of Neighborhood Services agreed to hold a public meeting on January 16, 2018, at which representatives from National Grid would answer questions and provide information about the pipeline project. The meeting was co-sponsored by the Neighborhood Association of the Back Bay (NABB), whose Green Committee is a member of BCEC. More than 150 environmental advocates, area residents, elected officials representing the Back Bay/South End, reporters, and others attended.